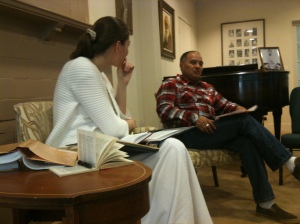 The small group studying the Bhagavad Gita at the Vedanta Society in Hollywood dissected just one four-line verse during their Sunday afternoon course, and much of the discussion centered on one word.

To Antoni Subirats, “clemencia,” as the Sanskrit word was translated into Spanish, implied a formal pardon from a king or a soldier. It was not a quality easy emulated today, in his opinion. The English translation, however, used “forbearance.” He turned to his follow classmates—two Indian Americans, a Mexican American, a Filipino man, and the Argentinean nun running the class—to explain what the English word meant.

“If we stick to the literal meaning of the word, we don’t go forward,” Indrajit Sarkar said, turning the conversation to forgiveness. The Gita is about a battle, he explained, but it can be applied to our spiritual lives as well. “I’m fighting a battle every day in my life.”

Sunday at 11 a.m. is known as the most segregated hour of the week, as races and language groups separate for their own religious services. Sister Jayanti’s bilingual Bhagavad Gita class, however, is a unique experiment in integrating the practice of Hinduism in the United States. The philosophically oriented Vedanta is both a help and a hindrance in that effort, but the Argentinean nun has founded that working across the lingual divide is a spiritual exercise in itself. …