LOS ANGELES — An interfaith group representing 15 organizations spoke out against gun violence Thursday (May 29) in the wake of last week’s deadly shooting spree in Santa Barbara.

Religious organizations have lobbied for stricter gun control in the wake of mass shootings, and this latest effort was no exception.

“We are here this morning to stand with the multitude of groups across the United States who are advocating for sensible, common sense laws to limit the effects of gun violence,” said Steve Wiebe, co-chair of the Abrahamic Faiths Peacemaking Initiative. “Our faith traditions — Judaism, Christianity and Islam — spur us to peaceful solutions as we recognize the inherent worth of each individual life.” 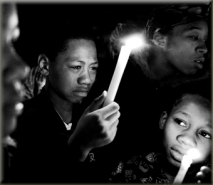 Urban violence takes a toll on children, but in Chicago, the Catholic Church is there to support them.  END_OF_DOCUMENT_TOKEN_TO_BE_REPLACED